By Alex Miller April 19, 2018
Go to comments
Leave a comment

When it comes to photographic composition, there are some foundational elements that every photographer should know. In this blog post, I will discuss what I consider to be the five most important elements of composition. These tips on composition will be most useful for nature photographers, but can still be relevant for all forms of photography.

Lines play a major role in any photographic composition. Lines will help to balance your photo, direct the viewer’s eye, and comprise the overall message of the photograph. Strong lines within a photograph also make an image pop! What I love about photographing nature is that one can find lines everywhere. Begin by deliberately placing the horizon line within your image and then search for additional elements than can create leading lines such as trees, rivers, creeks, rocks, clouds, and more. Almost anything can create lines within your photograph with the right perspective. When you're out with your camera, look around and see what kind of lines you can find within your environment.

Once you grasp the concept of leading lines, this gives you total control of your subject and the direction of your viewer’s eye. For example, when photographing a mountain, you’ll likely find trees or maybe a river in front of you. Use the direction of the river or the height of trees to direct your viewers’ eyes toward your main subject, in this case, the mountain.

Below is an example of an unexpected line that helps add interest to the image. I captured this image of a lake at sunset with Mt. Hood off in the distance. I used the rocks in the lake and a duck to create a line that leads the viewer’s eye all the way up to the mountain, which I intended as the main subject. 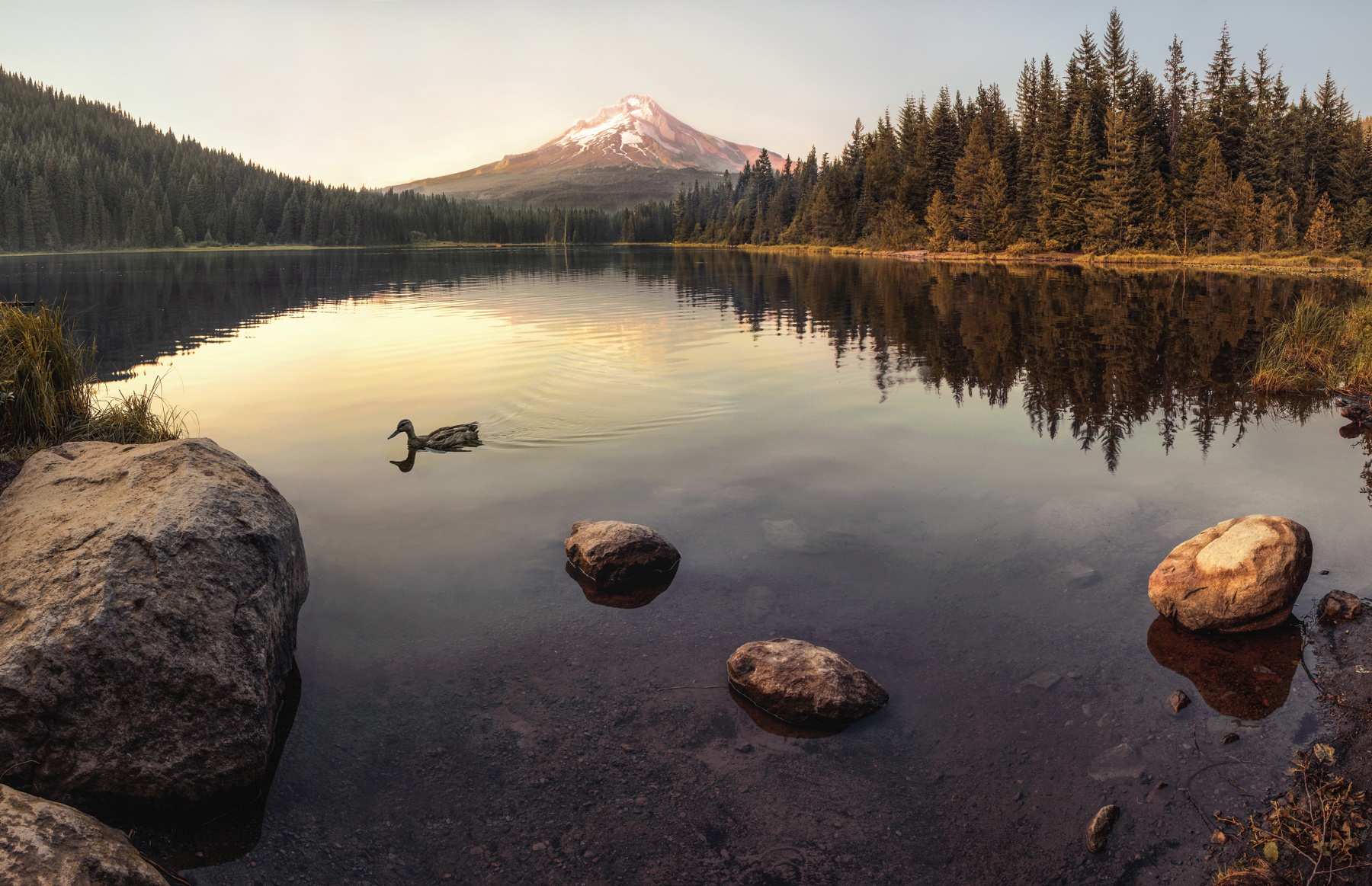 Another example of leading lines is a gentle “S” curve which is great for creating a flow throughout your photo and directing the viewers' eyes around the image. A snaking river is a perfect example of a leading S curve. 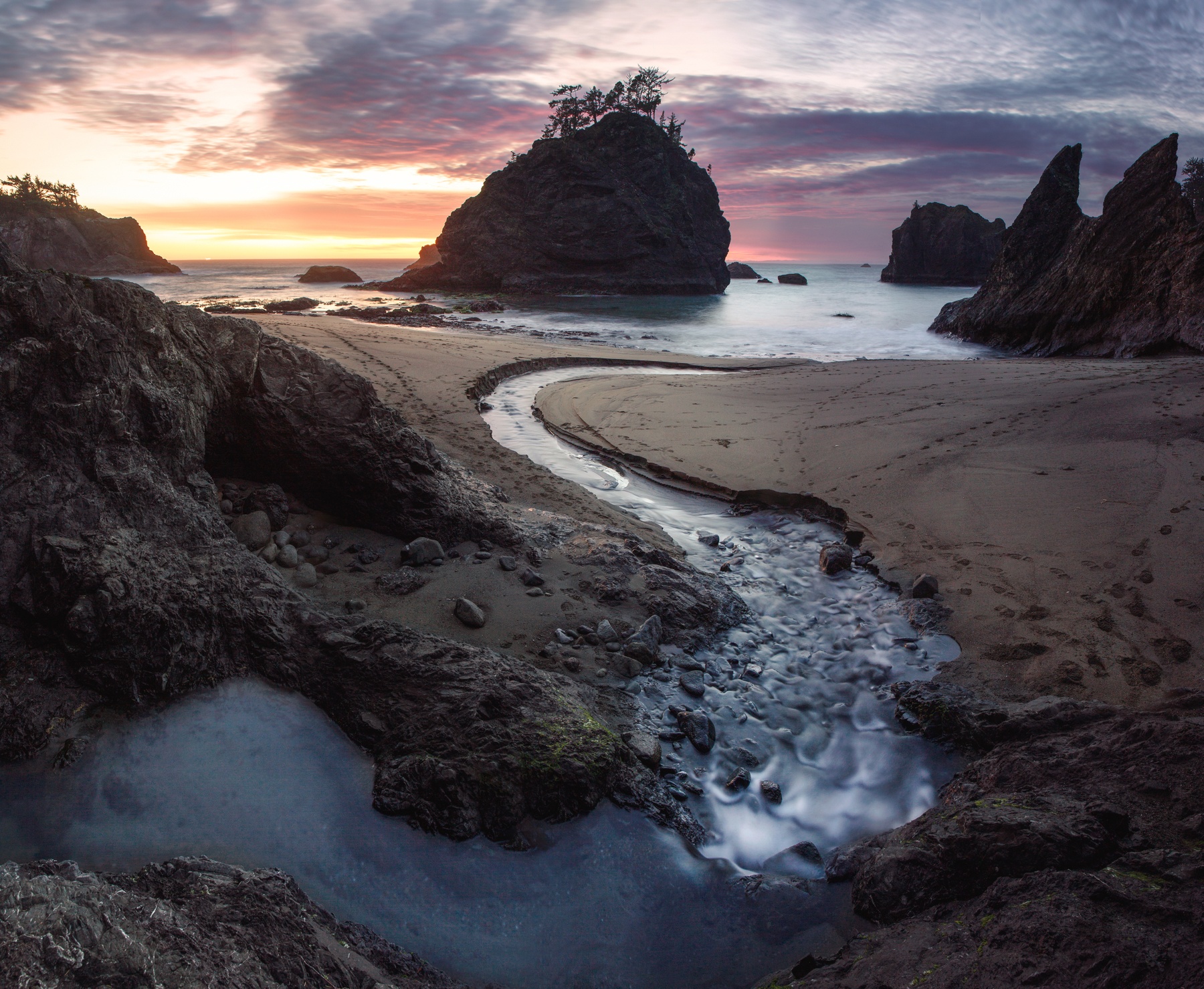 Every element within your frame has a shape and each shape will have a varied effect on your viewer. A circle, for example, can create a calm and harmonious feeling while helping direct the viewer’s eye around and inside the circular shape. On the other hand, a triangle will make your photo appear much sharper and geometric. It will also point the viewer’s eye in a specific direction which makes intention and planning a necessity when featuring this shape.

Below is a natural circle created by Thor's Well at Cape Perpetua. The lines created by the flowing water leads the eye to the circle in the center of the image. These combined elements create a compelling composition. 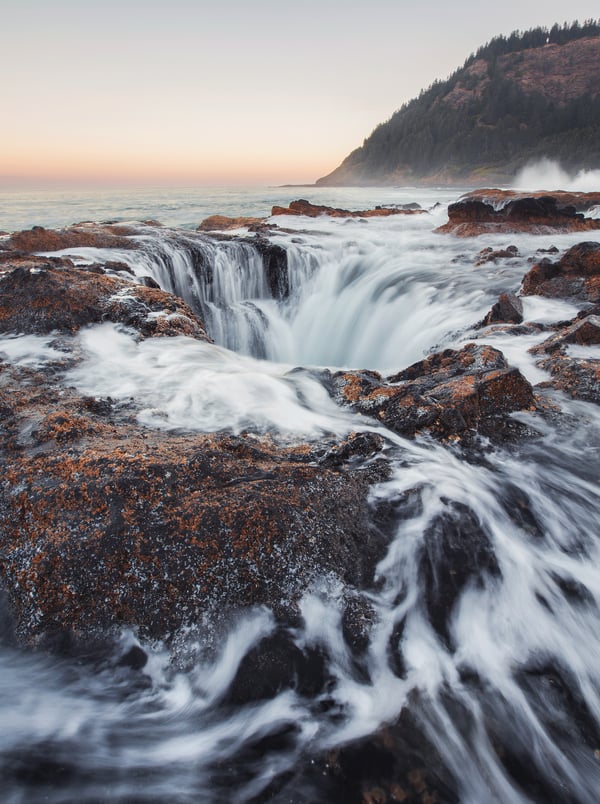 Below is an example of triangles in an image. This shape leaves us with a much more rigid photographic pattern.

Framing, the third element of composition, is one of my personal favorites. This element is a bit more difficult to find, but if discovered, can make incredible photos. Framing means using foreground elements to border a main subject within. This adds visual interest to your photographs and absorbs your viewer into the scene. When possible, seek to include textures within your foreground frame as this will also help draw the viewer’s eye toward the main subject.

Framing is a great way to make your main subject pop and offer more details surrounding your location. It also helps to tell the full story of your photograph as you’ve included more than one element from the scene.

In the image below, I used trees to frame the lighthouse. The Oregon Coast offers a variety of diverse tree species which help to create memorable shapes and lines. I felt as though I’d stepped into a storybook when at this location, so my goal was to convey this same feeling within the image which the framing helped to achieve. I encourage you to find distinct elements in your surroundings that will help a viewer understand more about the overall scene. 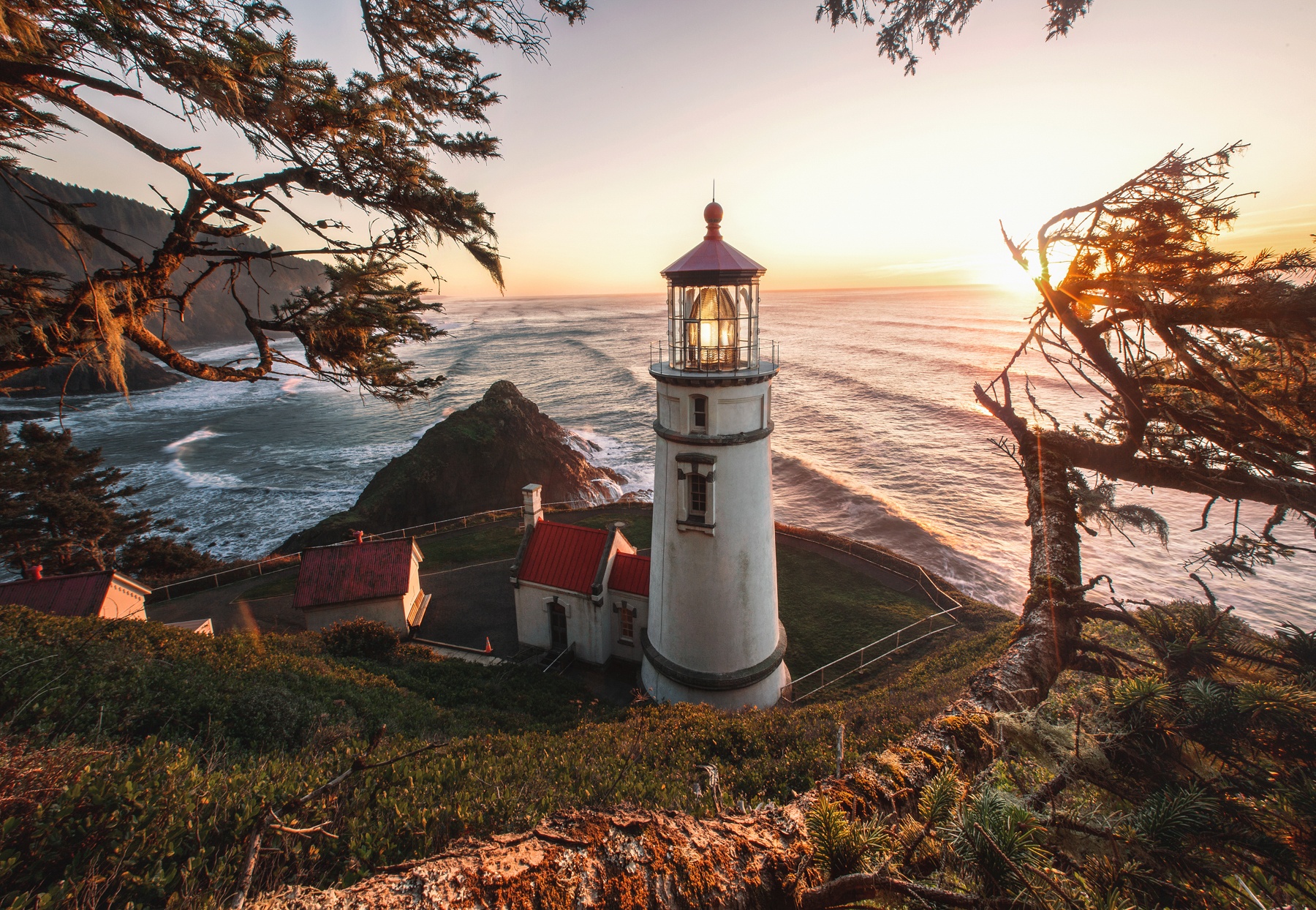 Below is one of my favorite images I’ve captured to date. For this shot, I stood under the tree and adjusted my lens until the leaves and branches fully framed the waterfall. This perspective allows the viewer to feel as though they were peering through this tree themselves. Of course, timing is everything, and I was lucky enough to capture the sunrays just as they lit the orange leaves, making them glow. Be patient and ensure you’ve captured the best lighting and colors that your location can offer! 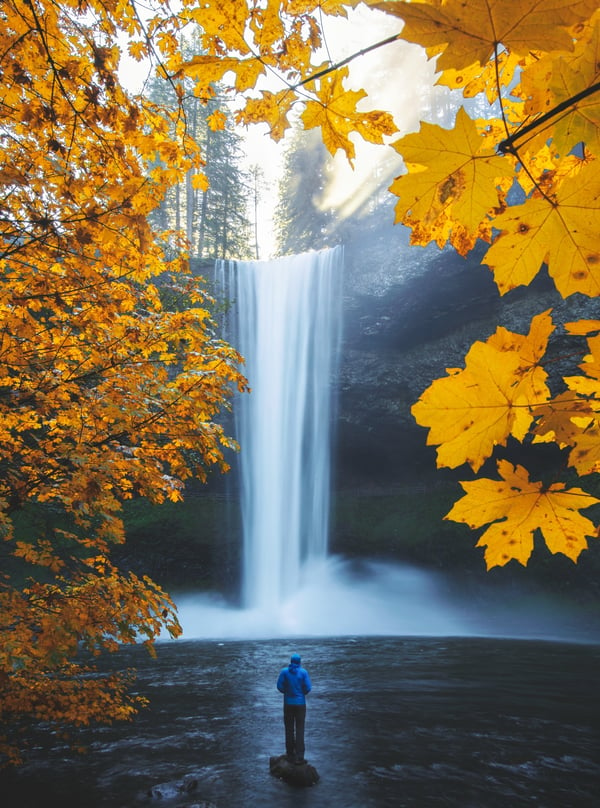 Chances are, you’ve seen many images that appear almost three dimensional; like you could jump right into the photograph. This effect is called depth, which is the fourth compositional element. In my opinion, depth is one of the most important elements of composition but is an element that is often overlooked.

An image without depth will appear flat and dull and will not inspire the viewer. I've seen thousands of images, and have photographed many myself, where the location is not done any justice due to the lack of depth in the photograph. Although important, depth can be a tricky subject in photography. Depth is created by elements such as lighting and the position of your subjects. Unfortunately, the scene you’re photographing won't always have great depth as it can be dependent on the time of day, the weather, the lighting, and more. Luckily, this is where creativity comes into play!

Since this blog post is focused on nature, which is often only lit by natural light, the sun or moon are our only sources with which we have to work. To create depth, you must use the shadows and angles created by your light source.

In my first example image, it was pouring rain and completely overcast. In this weather circumstance, depth can be tough to convey. Luckily, I found some brighter lighting on the foreground rocks which helped bring the photo to life. The viewer can clearly see the space between them and understand the depth of the scene. The soft light cast on the tree created great contrast too. While clouds may first cause a location to appear dull, you can often use the soft diffused lighting to your advantage. 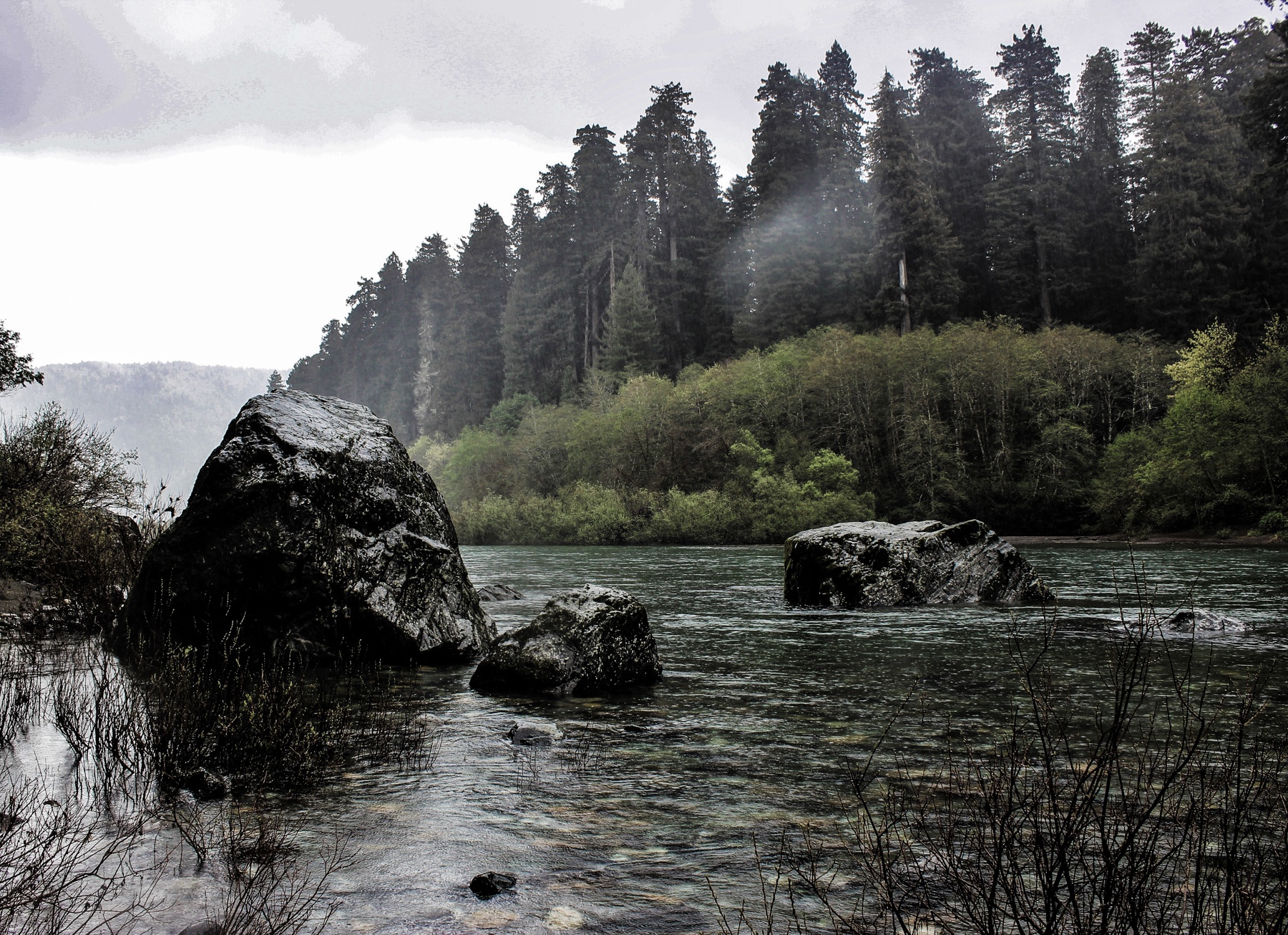 Another example of depth is this shot of a lighthouse in a field of flowers. Even though I was shooting directly toward the sun, the light that was cast on the backs of the flowers and grass made them glow. Outlining your subject in bright light can be a great way to show depth, especially in more harshly lit conditions.

The key to capturing depth in your images is to pay close attention to the light in your surroundings. Even a small amount of lighting can mean the difference between dull or dimensional.

The final element of composition is point-of-view. This is an interesting element because it requires one to think outside of the box and get creative with each location.

To master this compositional element, you must test the various angles of capturing a photograph. Get up close to your subject, shoot below or above, behind, or directly in front. An action as simple as crouching down to capture the details in the foreground can make a world of difference for the final photograph.

Another interesting aspect of point of view is that it can drastically change the mood of a photograph. High angles can offer an aerial or bird’s-eye-view perspective, while low angles can add additional details that your viewer often overlooks. When it comes to landscape photography, many of the popular locations will have been photographed thousands of times. However, with a creative point-of-view, your image can look COMPLETELY different from the others. The more you challenge yourself to find creative angles and different vantage points, the more successful your images will be.

Below is an example of a creative view of the popular Vista House in the Columbia River Gorge. This house has been photographed many times from ground level, but not as frequently from above. Of course, this new vantage point offers an entirely new perspective of a well-known location. 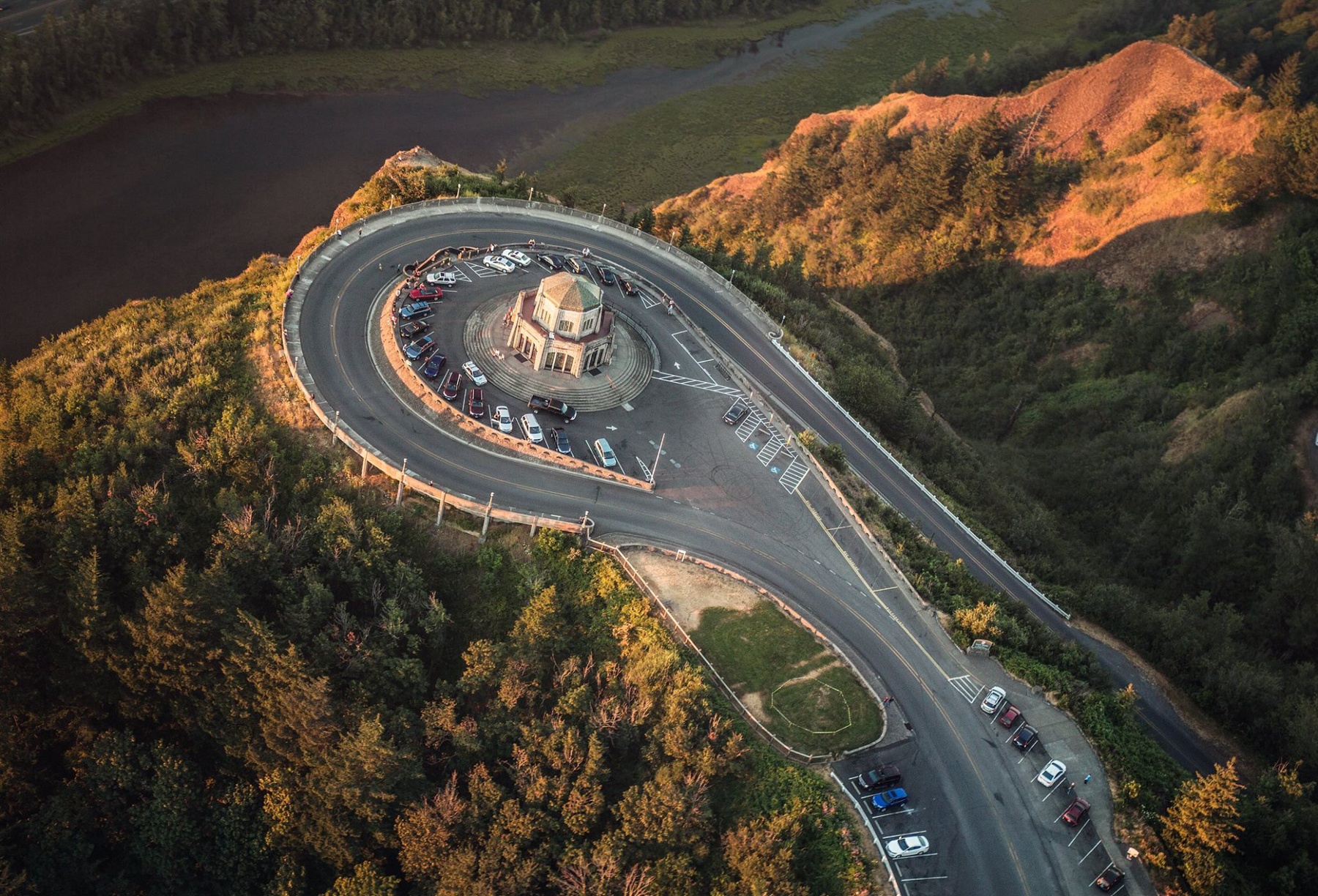 Below is an example of a low angle composition. Your first instinct might be to photograph the big rocks in the distance, but here I decided to aim the camera below the rock. The moss adds more detail to the photo and creates unexpected shapes which changes the entire scene!

When it comes to composition, it’s all about perspective and trying new things. Next time you're out in the field, challenge yourself to find new angles and viewpoints. Change your height, shoot from below and above. You may be surprised with your results!

The 5 Elements of Composition in Nature Photography

Composition is a symphony of these five elements working together to compose a single image. In a well composed photograph, each element of the image will complement the others to convey a feeling, message, or simply to display something visually appealing.

Imagine a photograph as a window through which you can share experiences with your viewers. From where would you want them to view the scene? How would you show it to them? Attempt the image from multiple angles, various layouts and diversify your camera settings when you're out creating. Shoot what feels right and natural to the scene.

Finally, I suggest studying photographs by photographers you like and admire. Review their compositions and see if you can pick out each of these elements in their photographs. This will help you to better find these compositional elements when you're out shooting on your own!